5 Ways To Start an Acting Career 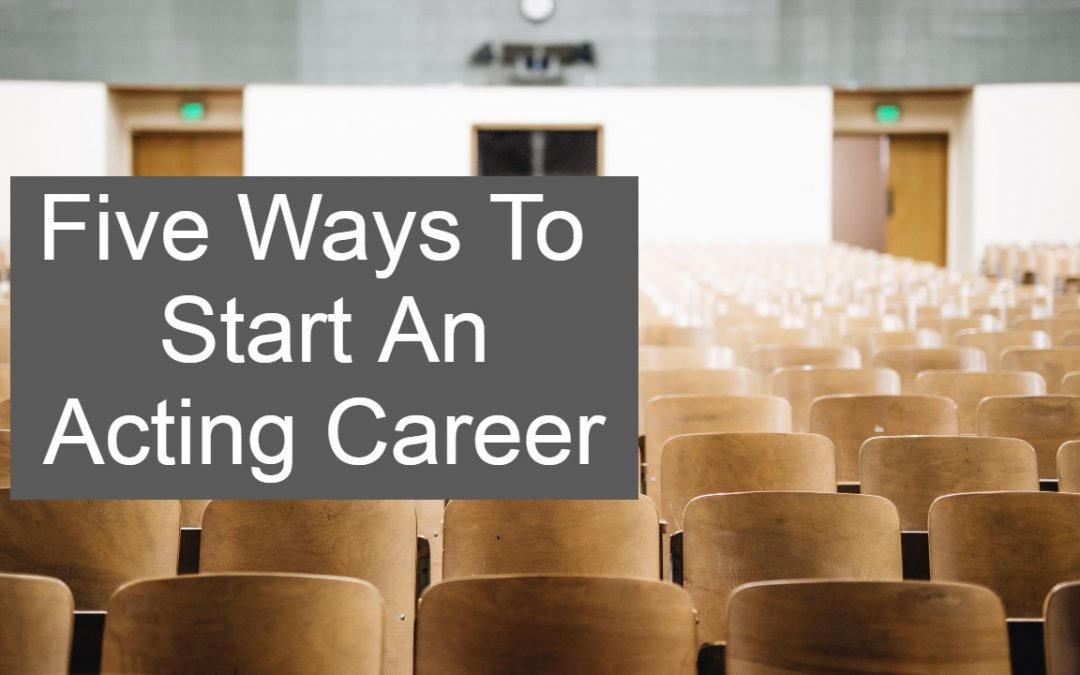 Getting started in acting can seem intimidating at first. There are so many avenues that can be taken it can be difficult to know where to start. In this article, we outline the most popular but remember that it’s not an exhaustive list. If you don’t have contacts in the industry then it can be difficult. However, it is by no means impossible and no one should discourage you from pursuing your dream career in showbusiness.

The point to focus on is improving your skills every day and pursuing your actionable goals to get to where you want to go. These are great places to start and if you want more information then feel free to subscribe to our mailing list and get auditioning advice and updates every week.

This site started by helping drama school applicants so it’s no surprise that we list drama school as an option for starting an acting career. Many fantastic US, UK and worldwide actors started their careers by studying for extended periods at esteemed institutions.

The strength of drama school is that you have an institution behind you to push you forward and help you improve. Often UK drama schools will put on productions and invite agents to attend. They may also have showcases where they invite casting directors and industry professionals.

We have an article that goes into the “Top Ten Drama Schools of 2020” for those students who are applying to UK drama schools this year. We also have our free article “Best Drama Schools UK” which is one of our top draws to the site.

There is no other education, workshop or course that can help you understand the workings of a set more than extra work. I’ve personally done extra work and most of the guest writers on this site have taken part in extra work.

You won’t win any Oscars or land any huge roles from extra work but it is a great education. There is no better introduction to acting than getting on set and actually doing it. Drama schools can try to replicate it – as they often do – but there is no substitute for the real thing.

Unsurprisingly we have a whole article dedicated to “How to Become an Extra on Film Sets” for those students or aspiring actors who want to find out how to get extra work.

Making Your Own Work

If you’ve ever attended the Edinburgh festival or an “indie” theatre festival then you will be taken aback at the entrepreneurial spirit of the artists. Actors are born entrepreneurs and they thrive when they are given the freedom to create their own work. Now more than ever it is important that creatives – especially actors- create their own work when they aren’t getting any.

You’ll be surprised to hear that many seasoned veterans go through lulls in their careers. The British actor Bill Nighy is famous for saying that he picked acting as a career because it’s assumed that you’ll be doing nothing for over 90% of your career. For many actors, this is exactly the case. It doesn’t need to be this way.

If you are getting into acting then starting your own theatre company and making your own work is a great way to get going.

This isn’t always the case, there are those that get lucky when looking for agents. If you’re able to coble together a showreel with some friends, if agents attend workshops or if you have a family friend that is an agent it is possible to get signed.

If drama school is too much of a commitment and if you’re not ready to launch into producing your own work then workshops is a great place to start. In large cities there are always acting workshops and classes that run on a weekly basis. Networking within these groups can be a great way of starting a career in acting.

Sometimes the teacher will know someone in the industry or a fellow classmate may be a professional who are willing to introduce you to their agent. There may be a director at the class who is casting their upcoming production and liked the work you produced at the workshop.

You never know where these meetings and workshops may lead but you miss 100% of the shots you don’t take. Also, acting classes are often fun and increadibly rewarding in themselves so there is no harm in attending them. One of the most important skills to have as a creative is to constantly be improving your craft.

Getting your foot in the door is the hardest part. That normally means getting an agent but it could mean landing a meeting with a casting director or producer. Sometimes people get their break by networking and knowing the right people.

If you want to know more then feel free to sign up to our mailing list or email us at team@howtodrama and we’ll get back to you to answer your question.